We celebrated the Hub matriarch’s 90th birthday at the “store” Saturday with a proclamation from her successor as Marshall mayor. The walls may carry books, not shoe boxes, these days, but we remember our heritage.

Long before the Kariels sold me the building, Audrey and I served on the Marshall city council (then called the city “commission”) from 1996-2001.

My association with her family (and the Hub, which now serves as my offices after 112 years and three generations in her family as a shoe store) goes back to 1981, when her late husband Louis had me come by the store to get my bus ticket and spending money from the American Legion for my attendance at Boys’ State in Austin during high school.

Texas’ Boys State was actually the subject of the Emmy award-winning documentary Boys State in 2020 – you might want to check it out. This “raucous journey into the heart of democracy” as Apple TV put it, captures 1,100 teenage boys from across Texas coming together to build a representative government from the ground up. It was an interesting week, as I recall.

For most of the previous half-century our families had been neighbors on the 100 block of East Austin, with my grandfather having a greeting card store two doors down from the Kariels at the Hub, and we enjoyed continuing the association through the city commission and various historical groups over the years.

We have hosted the Kariel family at the Hub numerous times in the past 12 years, including for the dedication of the building’s Texas historical marker recognizing not just the building but the contributions of the Kariel family to the history of Marshall, a Shabbat service before a patent trial (the family used to conduct services in the store after the Marshall synagogue closed, so it wasn’t the first) and even a mezuzeh dedication out front (for a former altar boy, my Hebrew’s not bad as you’d expect).

So it was a pleasure and a privilege to host the Kariel family in our offices again. And to paraphrase Yoda, “when 90 years old you are, look this good you will not.” 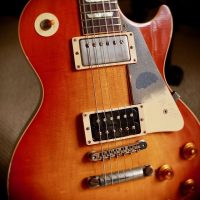 A Sherman jury in Judge Mazzant’s counter answered a 22 question verdict form Friday in this trademark-plus case before leaving for the holiday weekend. 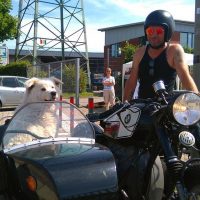 While the amended complaint was timely, Judge Albright found that it still should not be permitted. (In the sidecar was a discovery dispute, which, unlike the photo was not a good boi).

The issue presented was whether the defendant would be required to identify and include any product that exhibited the accused functionality and any reasonably similar functionality.

Now this is an interesting situation.  The court vacated an alternative service order after seeing the new arguments & authorities in a 33-page mandamus petition – which hadn’t been included in the 3 page opposition to the original motion.

It’s not “ESI” – it’s electronic communications (usually just emails).  And here’s an order on what you get, which provides a good summary of what a resolution to these disputes can look like.

I’m enjoying an online roundtable discussion today on the discoverability of litigation funding.

The panel consists of a professor who’s written on the subject, a litigation funder, and a lawyer in a prominent defense firm who works with the U.S. Chamber of Commerce in DC advocating public policy initiatives requiring disclosure of litigation funding agreements because his clients claim they adversely affect litigation and need regulating. (For some reason his firm wasn’t identified, only the section within the firm, so this came out in the discussion).

Very good discussion of the different viewpoints. No direct representation by lawyers or clients who receive litigation funding opposing disclosure – or lawyers that argue for disclosure – but to be fair the discussion makes clear, by affirmative statements or job titles, none of the panelists represent plaintiffs or defendants in trial court proceedings, so you didn’t get the state of the art trial court argument on the discoverability issue. You did get a very good analysis of the issues this raises at the macro level – the arguments that I recognize that you raise to policymakers in the halls of Congress and state legislatures trying to enact legislation regulating the practice of litigation funding.

Judge Jordan partially granted this partially agreed motion, which provides a checklist of thing to, um, not do.