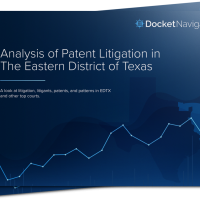 Most patent litigation practitioners are familiar with Docket Navigator, which tracks and codes activity in patent, trademark, copyright, and antitrust litigation to within a byte of its life.  DN recently began providing special reports to its Plus subscribers on topics of interest, beginning with a 2017 retrospective on patent litigation, followed by an analysis of the impact of TC Heartland.

Its most recent report analyzed patent litigation in the Eastern District of Texas, and includes analysis previewed for attendees at the recent EDTX bench/bar.  The report observes that “[a]fter TC Heartland, plaintiffs can no longer choose to file in the Eastern District of Texas (EDTX) as easily as before. These pages will explore some of the commonly-cited reasons that EDTX was formerly the most dominant court for patent litigation and the recent outcomes of cases in EDTX. Though an experimental method for testing popular claims about EDTX is virtually impossible, the following report uses Docket Navigator data and descriptive statistics to check their face value. In summary, our data validates common belief in EDTX’s speedy litigation and low grant rate for MSJs. Meanwhile, the claim that EDTX favors patentees could not be substantiated.”

I wanted to walk through what’s in the report and note some interesting trends.  In short, neither the summary judgment nor the outcome data is what you’d expect.

Get a cup of coffee first.  This is going to take a while, but I promise you’ll be better informed when we’re done.

The report contains the following:

Generally speaking, the data is from 2015 through the end of September of 2018, with outcome data beginning in 2017.

The summary judgment data compares grant rates for different types of motions in EDTX, CDCA, DDE and other courts and breaks it down by HAE and non-HAE.  This is a new term and requires some description. A “Highly Assertive Entity” (HAE) is defined as “a person or company whose litigation activity reflects a business model focused solely or significantly on deriving economic benefit from asserting patent rights in legal proceedings.”  Other entities track this using the term “high volume” or “low volume” filers, and I’ve frequently referred to “bulk filers.” (“Ankle biters” and “smash and grab” cases are terms also used by some after a couple of beers).  Whatever the term, the statistic attempts to segregate the two types of filers since that is often of interest. I don’t have an opinion on whether the criteria used are the best to do this – it is not an easy line to draw – but this is what the distinction is trying to capture.

The report states – correctly – that the EDTX has lower SJ grant rates overall, but when you parse the data by type of motion, it’s clear than one of these motion types is somewhat unlike the others, as Big Bird and his friends would say.  The category that seems to me to skew this in the report is that it’s also considering summary judgments of infringement – meaning the defendant doesn’t get a trial on its claim that it doesn’t infringe the asserted claims.

Moving along to the far more common motions for summary judgment of non-infringement by defendants, the story is very different.  EDTX granted almost half – 9 of 21 – in HAE cases, and 21 of 50 in non-HAE cases. That rate is higher than in Delaware, which is only 12 out of 34, and only slightly lower that the CDCA ( 14 of 27) and national (74 of 143).

The rates for no willful infringement are generally similar across districts (low and rarely sought). For patent invalidity there are some distinctions.  The grant rate nationally and in Delaware is about one in three.  CDCA is lower at one in four, and EDTX is even lower at one in seven. And a plaintiff’s patent “validity” motions, i.e. a finding that a patent is not invalid fare worse in EDTX than other districts, with all other jurisdictions noted granting slightly over half, while in the Eastern District only six of sixteen were.

There is a general observation to be made here, which is that the the EDTX tends to have a lower grant rate for motions that require a showing that there is no genuine issue of fact that requires resolution by a jury.  But when you subtract the ugly duckling of motions asking the court to find infringement by the defendant as a matter of law – which other courts grant at a rate significantly higher than the EDTX’ goose egg since 2015, the grant rates are actually not that dissimilar.  And the EDTX has better grant rates for defendants on infringement issues than Delaware.

The point I want to make here is that we tend to assume summary judgments are by defendants seeking to knock out bad plaintiff cases, and it’s important to note that the statistics DN is reporting is motions going both ways.  As the EDTX is typically disinclined to grant summary judgment where there is a triable issue of fact (I think there’s a rule that says this), it’s extraordinarily low rate (zero) for plaintiff’s motion seeking SJ on infringement plays a major role in DN’s finding here – but in practice is something I’d usually disregard.

But – and this will matter later – it’s an attractive characteristic for other districts like the CDCA, which we’ll discuss more shortly.

How you define a “patentee win” is key here – DN defines it as a win on at least one asserted claim, which is a very lenient standard, but does at least give us a yardstick.  But even using it’s, it’s clear that patentees are winning only miniscule numbers of cases no matter where you look – and their win rates are significantly better outside the EDTX.  For example, HAEs won 4 out of 69 in EDTX while at the same time they won 25 out of 72 in Delaware.

Let me say that again – the data shows that highly assertive entities won less than 6% of the time in EDTX in 2015-2018 but over a third of the time in Delaware.  Other than New Jersey (which I suspect represents a Hatch-Waxman case) they didn’t win at all in any of the other districts DN reports.  Looking at non-HAE cases, the success rates are generally comparable across districts, although, again, Delaware and CDCA are noticeably better for plaintiffs than the average, and EDTX a little worse.  Again, this will become significant shortly.

What this really means is number of patent claims asserted in courts divided by technology and nontechnology, and here I’ll use the charts.

EDTX is, appropriately NFC East-leading Cowboys blue (they are, after all, from the EDTX), Delaware is light blue, and red and yellow are CDCA and NDCA respectively.  Unfortunately the cut and paste loses where TC Heartland is located, which is right at the “262” number in 2017 Q2.  But you can see that accusations were trending down for over two years prior to TC Heartland, then dropped dramatically after it – sending cases to plaintiff-friendly Delaware.  (See above data).

What this tells us is that following the eDekka and Iris Connex sanctions awards by Judge Gilstrap in January 2016 and 2017, respectively, patent filings in the EDTX were decreasing.

Nothing to say about the non-technology chart – EDTX has never been a major forum for these.  Obviously Delaware is, and sometimes it really is.

Now this is an interesting statistic, which DN’s Darryl Towell talked about at the recent bench/bar.  I know from experience that given limits on extensions and current scheduling conference practices scheduling conferences are usually approximately 120 days after filing – with infringement contentions due shortly before and initial disclosures due a little later, but invalidity contentions not due till six weeks after.

What this chart does is elegant – it sets out the percentage of terminations of cases in EDTX, DDE and CDCA that occurred within 150 days of filing.  This means it’s almost perfectly calibrated to identify the percentage of cases that settle no later than shortly after the scheduling  conference and before invalidity contentions are due and substantive discovery starts. 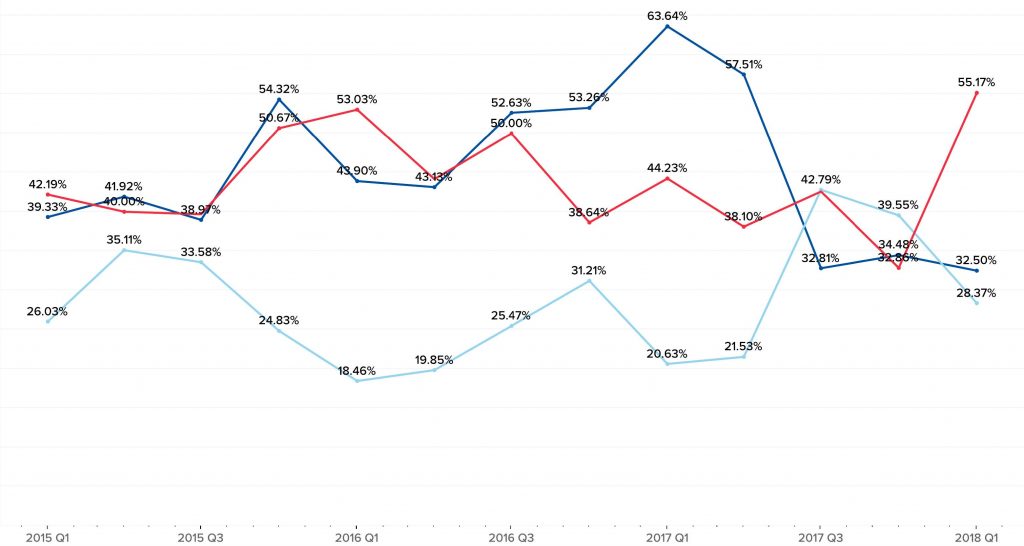 What this tells us is that following the eDekka and Iris Connex sanctions awards in January 2016 and 2017 respectively, an increasing percentage of the cases remaining in the EDTX were settling no later than the scheduling conference, meaning that little substantive work was happening in them.

Again, TC Heartland occurs right at the 57.51% EDTX number. So it also tells that that immediately after TCH those types of cases – the quick settlers – left EDTX and went to the aforementioned plaintiff’s haven (statistically speaking) of Delaware, where its percentage of quick settlers doubled to 42%.  What’s interesting is that two quarters later the quick settlers left Delaware (September 2017 Apple case, cough, cough) for CDCA.  Again, note what the data above tells us about outcomes in CDCA.

Isn’t this a great statistic?  I need to add this to my morning alerts.

Jury Determinations in US District Courts

Holy crap – this is even better.  Setting aside the abominable relative sizes of states, which looks suspiciously like it was crafted by someone who went to Oregon, this chart compares districts by using their percentage as favoring patentees (red) or patent challengers at trial. 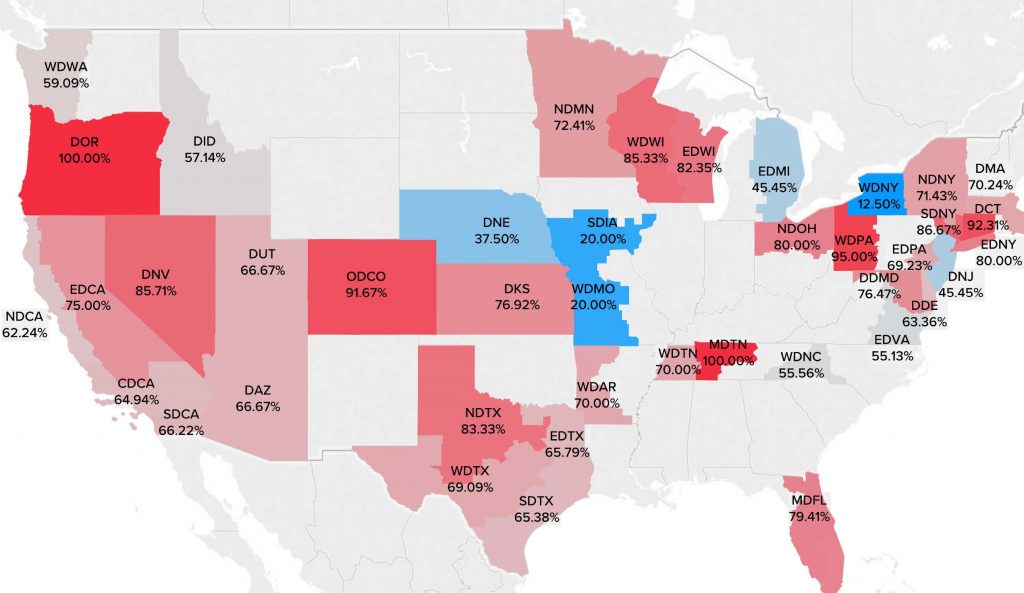 What this tells us is that in terms of jury outcomes, the patent-heavy districts are extremely similar – Delaware is 63%, EDTX is 65%, NDCA is 62% and CDCA is 64.9%.  Keep this in mind the next time you read how juries in a given forum are “plaintiff friendly”.  According to the data, EDTX ranks third out of four in Texas in terms of the plaintiff’s likelihood of winning at trial.

Characterizing a dismissal as a “settlement” is a little dangerous because these statistics usually include walkaways, which in my experience are disproportionately common in bulk filer cases. Unfortunately it’s very hard to solidly characterize which dismissals are and are not the result of settlement, so often they’re all characterized as interchangeable. But setting that aside, the data shows that “[o]verall, EDTX cases settle at a rate similar to cases in Other Courts” at 91.9% compared to 88.7% for HAE cases and 83.2% versus 81.2% for non-HAE cases.

Again, the data shows that outcomes in the EDTX favor patent challengers marginally more often than those in other courts.

One chart where the EDTX is significantly better for patentees is when the same patent is asserted in EDTX and elsewhere.  Where DN can track that, the win rate for patentees goes up from 3.01% to 12.84%.  Since we’re working with a 100 unit scale, you can think of this as starting a drive on the three yard line or the twelve yard line. Obviously one’s better, but neither is good.

In conclusion, I highly recommend this report to readers.  It provides an enormous amount of highly useful data, and underscores how much you can learn by actually looking at the numbers and creating your own opinions as to what they mean.  My characterizations above of what the data means may or may not be correct, of course, but they’re undoubtedly better informed as a result of studying this report.