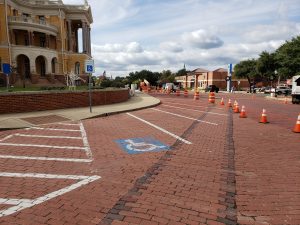 It often happens when walking with a visiting lawyer or client to or from the federal courthouse in Marshall that I get a funny look when we cross the bricked-up tracks on the north side of the old courthouse.  “Why are there train tracks in the middle of the square?” I’ll get asked.  I explain that those aren’t train tracks.  They’re from the old streetcars that used to run from the Marshall train station south the few blocks to the square. At the courthouse they split and from there went out half a dozen blocks or so to the neighborhoods east and west of downtown.
The problem is that until today I’ve never been able to find a decent photo of the trolley cars. 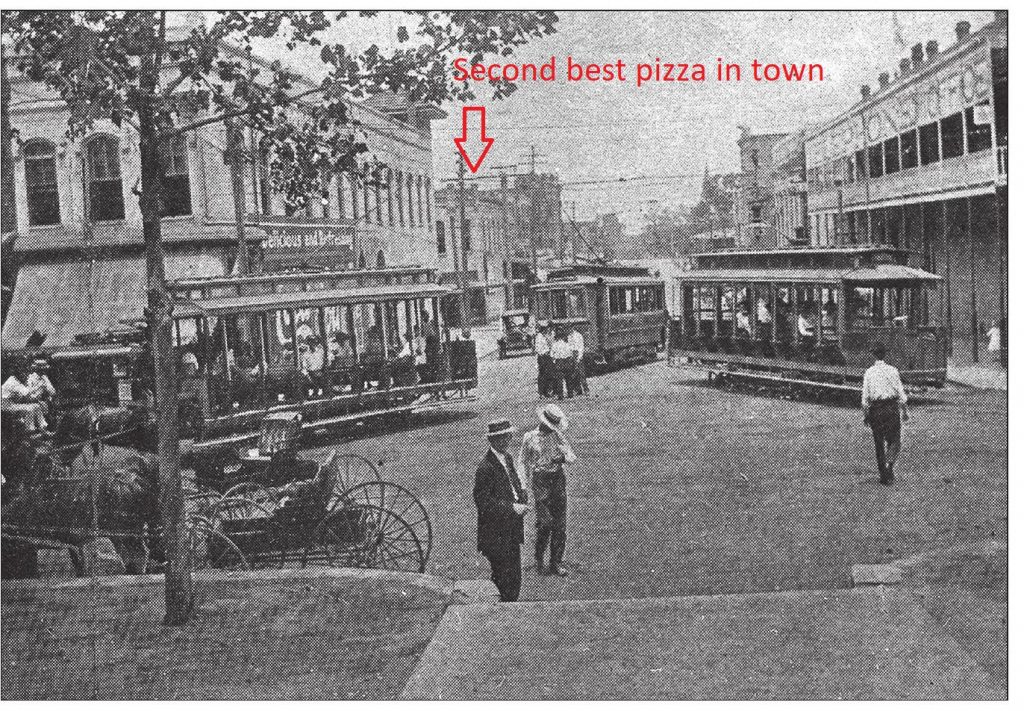 But here they are in a “History From Our Files” from the Marshall paper this morning, shown looking north from the steps of the then-new county courthouse shortly after 1900.
The “telephone” building on the right is now Telegraph Park, but was still there when I was little – my grandmother clipped poodles in it.  And the block of buildings on the left were razed in the mid-70s.  The reason I know that is that my mother took me out of school to watch them being torn down.  Why that was a “take Michael out of school to watch” event I never understood. But then, it was also a family event to watch concrete being poured back then – my initials are still in the sidewalk next to my office from when the concrete was patched in 1971 in front of my grandfather’s store, and he insisted she bring me out so I could put my initials in.
But immediately behind those buildings under the arrow is what was then the Marshall “opera house” which I’ve written on previously . “Opera house” was the term used in rural Texas for the places where visiting troupes of actors, singers, musicians and other entertainers played at stops up and down the railroad lines.  For example the Sherman “opera house” is now our firm’s offices in Sherman, as the above post notes. 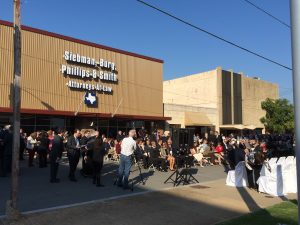 It looks a bit different now, as shown at the dedication of the Sherman courthouse for Judge Brown a few years back.  Candidly, I preferred its original appearance, shown at right when it was a third floor and two towers taller. 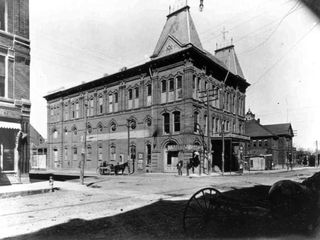 But I digress.  Patent practitioners will recognize the building being pointed out as Pazzeria by Pietro – which was formerly the Blue Frog restaurant.