Forget virtual hearings. I need a trial to try out my new toy. 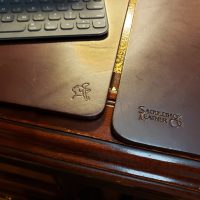 For those interested in office desk pads and an analysis of the pros and cons of different types of leather, I have a review of Saddleback Leather’s new desk pads on my personal weblog Puttering in the Study. (Use the direct link or you’ll get dropped in the middle of a detailed analysis of the fantail structure of postwar Essex-class carriers, and nobody wants that). 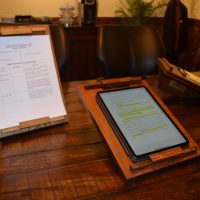 As readers know, I do a bit of woodworking from time to time, especially since I inherited the half a linear mile or so of 100+ year old original growth pine shelving in the old Hub Shoe Store that we renovated into my law offices in 2009-2010.

I’ve built shelves and book racks with details based on the store’s original storage cabinets, as well as a couple dozen handmade photo frames with giclees of an original painting of a local jury box for the board members my year as chair of the State Bar’s Litigation Section.

The latest project is a slant-top stand I use for reading and editing documents, both on paper and on my iPad.

The photo at top of the post shows the first prototype in the background, with the two second prototypes in the foreground. I stained them differently to match the Kariels’ two desks in the old store, which we still use in one of the attorney offices on the visiting side.

In order to use them both as a slant-top editing desk and a copy stand I designed them with different slopes on the back so you can use them as both – just flip them 180 degrees. I resized the surface to accommodate not just iPads and papers, but Circa notebooks, since that’s how many of the documents I work with are bound.

Interestingly, this photo of the original owner of the Hub Shoe Store Mose Weisman in the store shortly after its opening in 1897 shows something fairly similar at right, which appears to be a stand for displaying a shoe.

I like the stands because they eliminate glare and make it easier to read documents both because of the angle and because they seem to hit the sweet spot for my reading/computer glasses. But I still plan to build another set with improved dimensions, finish, and “pencil rail” design. 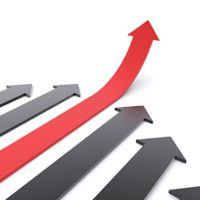 Since I began operating my own office ten years ago, I’ve been interested in law office management.  Specifically, how do lawyers in any size office handle the routine administrative overhead of running a law practice, with an emphasis on personal productivity when you control the tools you use.

I’ve written before on personal productivity topics, including techniques as well as tools such as programs, and wanted to update with some of the tools and techniques that are working for me now.

Three years ago I posted that I had switched back to Remember the Milk (RTM).

I still like the program, but not long after that I switched again, to ToDoist.  Aside from the aesthetic reason that it has more colors to play with (let’s be honest – that was a significant reason) it has better tools for handling projects, and for assigning tasks to my assistant.  It plays well with Evernote and my other tools, and can pick up tasks by voice command through Alexa and Siri, which is an added bonus.

It also means that when I have a little down time and want to brainstorm on projects, or organize projects, I can do so in the task program that lets me create subitems.  RTM really didn’t allow me to do that, although I think it may have added features like this later.  ToDoist isn’t perfect, but it lets me warehouse all the things I want to, and organize when I want to do them.  The biggest hole compared to RTM is the lack of a “location” field, but there are workarounds for that using labels and filters. 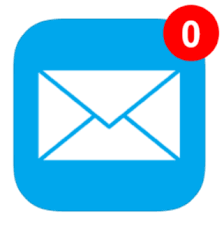 I have forgotten where I originally read this, but many sources make this same recommendation.  The basic rule that I started following several months ago, and have found to make a huge difference in my productivity and relative stress level is:

Here’s the idea.  As emails come in, once you have more than you can work as they come in, they should be reassigned to subfolders so that less urgent ones are shunted aside for later treatment.  The subfolders should be few in number and must be regularly processed.  These are the folders that work for me:

The key to this system working is having the right subfolders for you – a strict application of GTD (Getting Things Done) would have more and different ones, but these are the ones that work for my practice.

Doing this is typically the first and highest priority “to do” in ToDoist each day.

Action Needed Explained – If an email requires further action, and I don’t have time to do it right then, I send it to “action needed” which becomes a stack of emails that need to be worked.  Theoretically each email would then become a to do in ToDoist, and for a while I experimented with forwarding the emails to ToDoist so that they automatically became tasks, but there were three problems.  First, for some reason sometimes ToDoist didn’t catch the items, which you can be would be an issue. Second, it was an enormous time suck manually creating tasks for individual emails. And third, I usually still needed the original email to respond to or to refer to information in.  So I began simply working emails in this folder, or if the tasks is a larger one, creating a to do or an Evernote note, but finishing the tasks by responding to, and then deleting, the email in AN.

So now processing this folder is a daily “to do” in ToDoist but with a fairly high importance level so that work here doesn’t stagnate.

Reading Explained – A significant portion of my daily emails are non-case reading. Newspapers, magazines, blog posts, and so forth.  These are all shunted to this subfolder rather than being read as they come in, and when I have time, this folder gets worked.  As you would expect, this is a daily “to do” in ToDoist as well, albeit at a lower level.

Now I am spectacularly unsuccessful at keeping this folder empty – at present it has 2,218 emails and dates back only several months.  But that’s an indication of the system working.  It’s not the end of the world if I haven’t read a blog post on how and when to wear a cravat, or daily summary of articles in one of the newspapers I follow, and now those posts aren’t getting in the way of work-related emails.

To reiterate, this is not case-related reading.  Anything case related that I don’t read immediately – which I usually don’t for reasons I’ll get to – does get its own ToDoist entry under “Case Reading” with the necessary information (case, docket # and date) so I can sit down with the iPad and read and annotate filings as needed after my assistant has downloaded and filed them.  I tend to do this in blocks, and not as the documents come up, and the 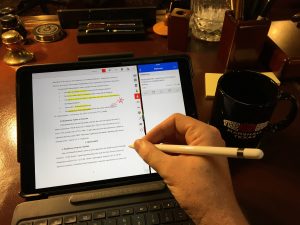 new split screen feature on the iPad means that I can have the reading list open in ToDoist while I have the document open for reading and highlighting in iAnnotate.  So if I delay reading filings just a bit, I can capture my highlighting and any annotations in my directories for case filings.

Billing Explained – in cases where I’m billing a client for my time, I may not prepare the billing entry at the same time I do the work of reviewing and responding to the email. Or the email may include work that is something that needs to be done within the current billing cycle, but not immediately.  If that’s the case, once I’ve confirmed that’s the case by either doing the work or confirming that nothing needs to be done immediately, I send the email to the B folder.

Again, this folder gets reviewed, and typically processed to zero, on a daily basis.  But in a pinch it can grow substantially while I’m working on more urgent matters, and then processed before the billing cycle is finished.  Nothing goes in it that can’t handle a little delay in creating the relevant billing entry.

Because my emails are run through a couple of steps for security purposes before I review them, I have pretty broad options as far as how I view the finished product. 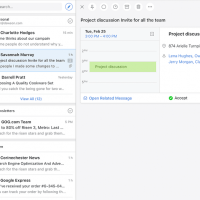 While I do most of my work in emails in the main program I use, I’ve started using an iOS app, Spark, for initial processing on my phone and iPad much of the time.

Spark has a unified “smart in box” for emails but breaks things out by broad categories of Personal, Notifications and Newsletters, and then moves everything to “Seen” once you’ve viewed it.  But the major benefit is that you can swipe the email into one of the three folders from the in box, or “pin” or “snooze” it for later attention.  So at a glance you can see what’s new, assign it if you have time to swipe, or just pin it to look at in a few minutes.  It works really well on a phone or tablet to stay on top of emails and get to a modified version of email “zero” because viewed emails are moved out of Spark’s”smart” in box as you view them, although they actually stay in your in box.

While you can view and work emails in the subfolders, because it threads the emails (which I hate) it is not nearly as good a tool for that use, and I typically switch to other programs to actually work the emails in the folders.

So those are the tools I’m using lately. Not saying they’ll be right for you, but thinking about them may help you get there.