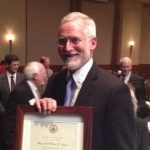 Erfindergemeinschaft UroPep GbR v. Lilly is closing in on trial, and on Monday visiting Judge William C. Bryson of the Federal Circuit, who as readers know, maintains an active docket of district court patent cases in Marshall and is formally invested as an honorary trial judge in the EDTX with a certificate and everything, recently issued a 13 page order ruling on the parties’ motions in limine.  (Ed. note:  “Erfindergemeinschaft” does not, as you might think, mean “find the mine shaft”, but instead roughly translates to “inventor’s association”, which makes sense since the company was founded by research scientists at Hannover Medical School.  No clue what “Uropep” means in this case involving a drug used to treat erectile dysfunction, but I’ll keep looking). The holding that has the attention is the last paragraph, in which Judge Bryson decided to exclude UroPep from referring to the “presumption of validity”.  He notes that there are cases going both ways on this point, and concludes that that simply means that prohibiting the use of the phrase would not be error.  Having looked both ways, he explains his ruling: “In the Court’s judgment, the use of the phrase “presumption of validity” would add little to the jury’s understanding of the burden of proof on the validity issues. Moreover, the phrase might be confusing to the jury, to the extent that the jury is required to consider both that phrase and the Court’s instructions on the burden of proof. At minimum, the use of the term “presumption” would require a further definitional instruction by the Court, without leading to any greater insight on the jury’s part as to the nature of the burden of proof on the validity issues. Accordingly, the Court will exclude the use of the phrase “presumption of validity” and instead will address the burden of proof in its instructions to the jury.” 237 – Uropep 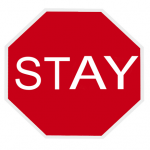 Requests for stays pending CBM review aren’t as frequent as they once were, but they’re still a crucial issue when they arise.  The applicable standards for stays in this context was set forth well in a recent pair of orders by an EDTX court, as analyzed below. 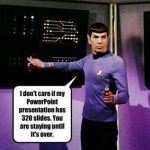 As readers know, Federal Circuit Judge William Bryson handles patent cases in Marshall on a regular basis, coming down as needed for hearings and trials.  “As needed” is the key, because he recently declined to come down for an abbreviated claim construction hearing, and denied a motion seeking to force the parties to travel from across the country to watch the defendant’s PowerPoint presentation.

The defendant in this case filed an opposed motion to hold an “in-court” hearing as opposed to one by telephone, claiming as the primary basis that they could “more effectively present their argument” because “the in-court format would more readily allow the parties to use demonstrative exhibits” (meaning Power Point slides).

“First, the Court almost never finds such demonstratives or other visual presentations to be useful in Markman hearings or hearings on other issues and typically instructs attorneys not to use such demonstratives. The Court prefers to have the attorneys argue to the Court and to use documents in the record (which are fully available to the Court) in the course of their presentation.”

Don’t you just hate it when the judge wants you to use documents in the record instead of your slides?  Next thing you know he’ll start talking about “evidence” like it’s something special. 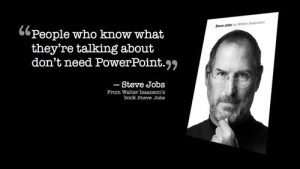 “Second, the claim construction issue in this case is a very simple one involving a single claim limitation that has been the subject of a previous claim construction order. The Court has fully familiarized itself with the arguments of the parties and does not feel the need for basic instruction as to the technology or the legal issue in question. The plaintiff has suggested that the Markman hearing would last about one hour. The defendants estimate that it would last two hours. The Court believes that even one hour is likely to be more than enough to fully explore the issue presented.”

And this second issue leads to the third:

“Third, the Court is keenly aware of the costs that parties incur in complex civil litigation and is interested in minimizing those costs to the extent possible. Although the defendants have represented, in effect, that they are willing to incur the extra costs that would be involved in conducting an in-court hearing, they do not speak for the plaintiff. The plaintiff has opposed the motion and has represented to defendants’ counsel that plaintiff would prefer not to incur those costs. Dkt. No. 102-1, at 2. In addition to the out-of-pocket costs to the clients, an in-court hearing would impose additional scheduling burdens on the attorneys who are forced to attend. A telephone conference can fairly easily be fit into a day of other productive work. An appearance in court in another city cannot.”

Remember Let’s Make a Deal with Monty Hall?  The game show where contestants had to chose their prize by picking a curtain?  Remember how badly the contestants wanted to change their mind after there was a goat behind the curtain they chose – and a new car behind the one they didn’t? Well, a somewhat similar situation was presented in Script Security Solutions v . Amazon.com, 2:15cv1030, in which