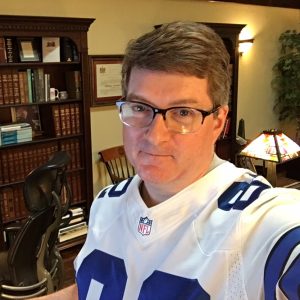 It’s a sad day with Jason Witten retiring from our beloved Cowboys, so I decided I had to wear the jersey to work. Which made for interesting sidewalk conversation when I asked a herd of lawyers headed past my office how they were expecting their hearing with Judge Gilstrap to go, where they were on the docket, and which pretrial motions they had rulings on already.  (This time next week Law.com will probably be running a story about how homeless people in Marshall quiz visiting lawyers about federal civil procedure).

But life goes on … as it did for the parties in this case in which Judge Mazzant entered judgment for $24 million and change following a jury verdict last fall in which the jury found that there was no patent infringement but that there was a breach of contract, specifically a confidentiality agreement, and assessed $15 million in damages.

A number of claims, including patent infringement, went to the jury, but the Court didn’t even mention what the verdict was on anything but the breach of contract, and Texas lawyers – who know that the letters that comes after C are … PRC – know why.

The Court submitted the issue of attorneys fees to the jury, which awarded $2 million, but postverdict agreed with the plaintiff that attorneys fees should be requested by motion, and set the amount at $7,304,454.14. I have attached that order in case it’s of interest.

The plaintiff subsequently sought entry of judgment, including the $15 million awarded by the jury, the $7.3 million in fees, post-trial fees and costs, interest, and court costs. The only disputed issues were whether the fees should be included in the judgment, and whether prejudgment interest should be included on attorneys fees.

Judge Mazzant concluded that it was appropriate to include the the fees in the award, and that while prejudgment interest may be allowed on fees that are paid prior to the judgment (he noted a split of authority on this point), it was not warranted under the facts of the case.